This post continues translation from Yiddish and analysis of letters sent by Levi Yitzkhak Liderman to his son, Morris, who was settled, initially, in New York City in 1910. For further background, see the first post in this series.

For links to other posts in this series, scroll to the bottom.

As noted previously, translation is an art. Any comments or clarifications by Yiddish speakers/translators are welcome. 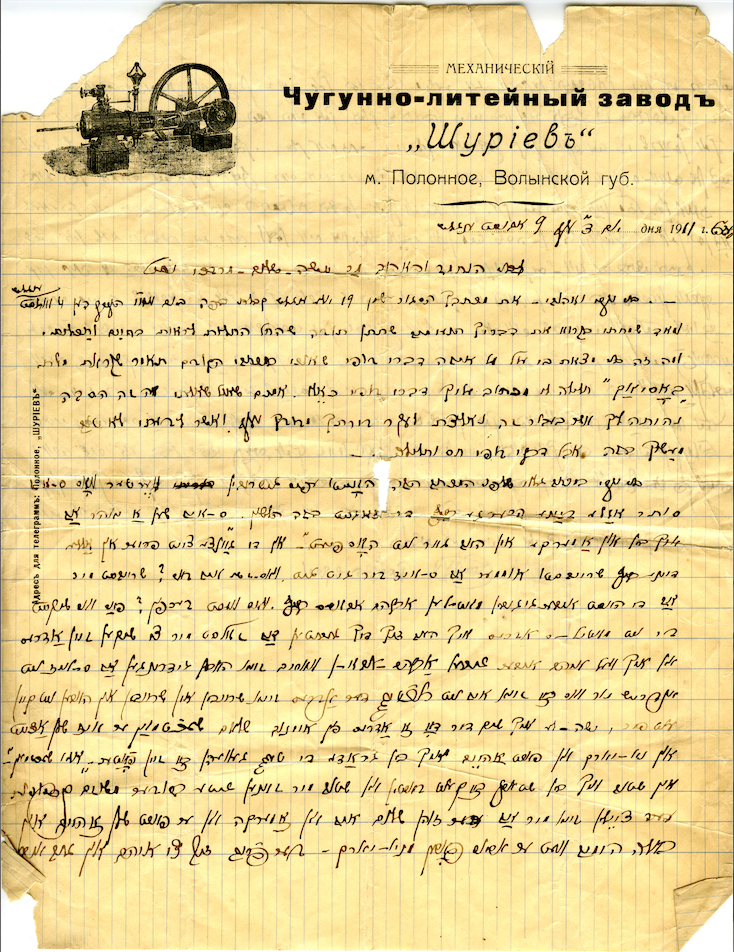 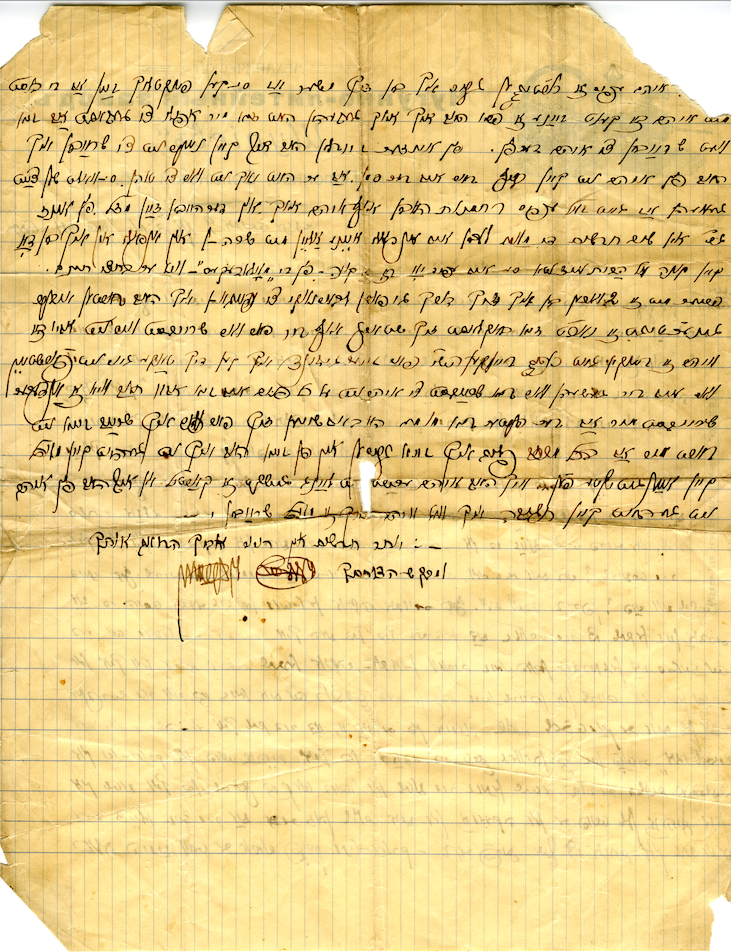 =====MECHANICAL=====
Cast-iron foundry
"Shuriev"
Polonnoe, Volinskiy Gub.
Wednesday, 9 August English 1911
[This letter was sent inside an envelope that has not survived.]

[Notes in blue as well as those at the end of the post are mine. For ease of reading, I have added paragraph breaks in the translation.]

My dear and loving son...

I received your closed letter from 19 July English on the 4th of August English. I was very happy to read your _____ words that you will give thanks that you are starting seeing _____ in life and Tachlis.

And what is this, my son, that you found some pressure in the slur word that I wrote in my previous letter that I wrote the word "Busiuk."[1] God forbid that I should write such a negative word. I asked what the reason was that you needed to leave [or ruin] your apartment with your uncle, and that according to my opinion, your actions weren't good. But curse words, God forbid...

My son, in your previous card, before this one, you write some words that contradict every single one of your previous letters. You wrote these words: "It is a year since I am in America and I didn't accomplish anything." The entire time before that, you wrote that it is very good for you there. Do you know ____ [why]?

You write that you have given Avraham Abba's letter to Mottel'n.[2] What is going on with that? Why can't you send Mottel's address? I have asked you to send his address, and I will give Avraham Abba's, as _____ [they?] were emphatic that _____ the address isn't correct. They write and write and do not get a response.

Moshe'leh, I am sending you an address of someone Shalom Shechtman. He is in New York already, and is traveling home. I happened to have been these days at his father's, "Abba [?] Schechtman." They know me very well in their home, _____ [we come over to complete prayers?]. They told me that their son Shalom is in America and is traveling home already, and one of these days he will be traveling from New York. Find him and go

ask him if it is true. I gather that you might know him. I also saw his wife and she even told me that she will write to him about it.

From our Zavle'n I haven't heard any news to write. I haven't received any letters from him. That's because he still doesn't have anything to do. It is time that God should have mercy on him and life his mazel [luck].

There is thank God no news from us. Mother, should live, is alone in Anipoli with Sarah'n, in Anipoli.[3] I am here. There is no buyer for the home yet. There is one buyer from the"Maladekes," but wants to pay half price.

You write to me that the uncle and aunt have complained why I haven't written to them.[4] I believe that in every letter I sent greetings, and I haven't received a single good response from them. I sent a card to him not too long ago and I did not get any response. I will write to him again.

There is no more news. From your father who worries about you, and is asking for your success.

1. босяк [bosyak] in Russian and Ukrainian means either "tramp' or someone who is down and out. Several Yiddish translators have told me that Levi Yitzkhak's handwriting is difficult to read. In addition, he sometimes included Russian words written in Hebrew letters. Apparently, Moshe must have misunderstood something his father wrote in his letter of 21 June 1911 regarding Moshe's move from his uncle, Jacob Simberg's, home.

Posts in This Series

This post continues translation from Yiddish and analysis of letters sent by Levi Yitzkhak Liderman to his son, Morris, who was settled, initially, in New York City in 1910. For further background, see the first post in this series.

I have included a small family tree at the end of the post.
For links to other posts in this series, scroll to the bottom.

As noted previously, translation is an art. Any comments or clarifications by Yiddish speakers/translators are welcome. 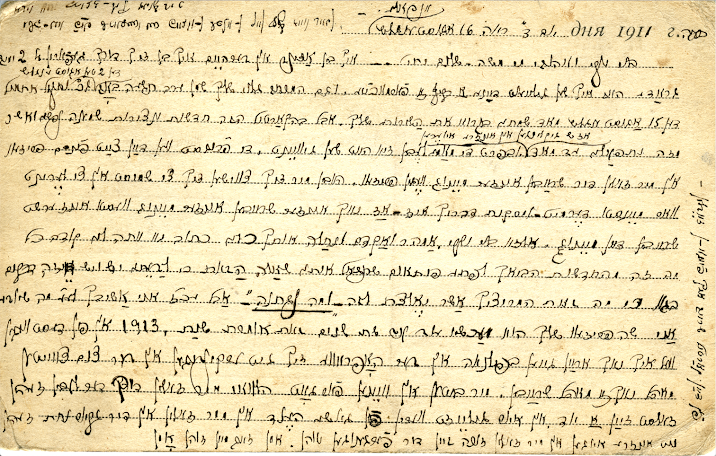 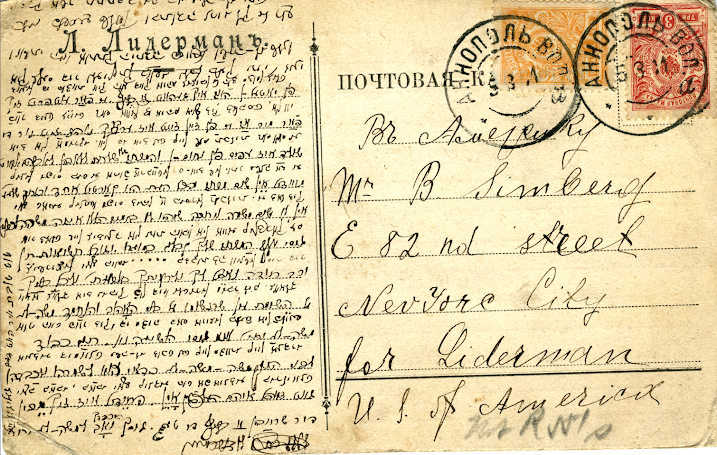 [This is the Julian calendar date, which was in effect in the Russian Empire at this time. The letter was written two days earlier than posted, on Wednesday, 3 August. The equivalent in the Gregorian calendar (in use in the United States, then and now) was 16 August 1911. The Hebrew calendar date was 22 Av 5671. As noted in the beginning of the text, the Torah reading for the week was Re'eh. ]

Mr. B. Simberg
E. 82nd Street
New York City
for Liderman
U.S. of America
[This address did not include a house number. It is a mystery how it made its way to Morris! In a small town such an address would likely suffice. But in New York City?!?
Previous cards had been sent to Morris care of J. Simberg, Morris' uncle Jacob. This one was sent to B. Simberg, likely Jacob's son, Benjamin. However, I have located no other records showing Benjamin at this address.[1]]

[Notes in blue as well as those at the end of the post are mine. Levi Yitzkhak tried to squeeze as much on the card as possible and did not break the text into paragraphs. For ease of reading, I have added paragraph breaks in the translation.]

I am currently home and traveled for two days. Happens to be, I already received your closed letter, as well as your card from the eve to Tish B'av [9 Av], the second of August in English.[2] I also received on yesterday, August 15 in English. I was very happy to read your lines, but the news in the card of your troubles made me sad, and it rang in our ears. Especially mother, should live, she cried.

You ask when your time is with the [prizev] [Russian word, призыв, means military draft], and we should write to you of our opinion about the [prisev] [draft]. We discussed it amongst ourselves to try to understand what you mean by that. And the bottom line of your words was that after we write our opinion to you, you will then write what you think about it. And so, my dear son, I will hurry and move forward and wish you as it's written.

We are asking and crying to God. I wish we should still see each other in this life. You should be a Jew [Yid] and be freed from non Jewish heroes and we should see much nakhas from you with our own eyes and we should have the merit to bring you pleasure. And my son, say Amen.