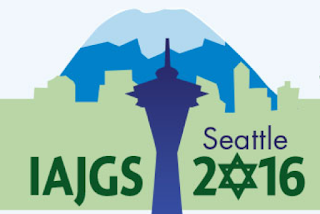 I have been absent from this blog for a few months while blogging for the official IAJGS conference blog. But, I will be posting my impressions of the presentations and the conference here. I will also, as I have in past years, compile links to posts by other blogger's in attendance who are posting about the conference (look for that info in a separate post).

I have been in Seattle since Friday, taking in the sights and sites - and eating lots of fish and seafood. I have also been madly trying to finalize what will be my newest presentation (set for Thursday afternoon) on genealogy training opportunities on the Internet. I usually do not like to leave these things to the last minute, but this one is taking a bit longer to develop than usual. So, I will have to take off some time from listening to other presentations to complete mine. 'nuff said.

Today at the conference I took in a portion of the Educator's Day, spent some quality time with my presentation prep and helped at the Ukraine SIG Share Fair table.


Educator's Day is a family history conference within the conference offered, for the first time ever at IAJGS, to Jewish educators. It was the brain-child of Carol Starin, retired Director of the Jewish Education Council, Jewish Federation of Greater Seattle. Carol is a fourth-generation Seattleite, who, inspired by a 1982 talk by Arthur Kurzweil, started researching her family history.

The schedule for the Educator's Day included an opening keynote address, a choice of three talks in each of two sessions and then a chance to view displays by and hear from from people with additional creative ideas for sharing the joys of family history with children.

Rivy Poupko Kletenik is head of school at Seattle Hebrew Academy. Rivy's inspiration for her genealogy journey started with her grandmother's Passover egg pot (pictured, at left, on the screen). Her grandmother brought it from Velizhe, Belarus when she emigrated to the United States. This is a tie that bound Rivy to her family history and helped make her visit to Velizhe in the summer of 2014 much more meaningful.

She also related her experience the following year in a visit to Satmar, Romania where she found the tombstone of her husband's grandfather. It revealed a family history that her husband, a Rabbi, did not know: that he was descended from an illustrious Rabbi.

Kletenik posed what she felt are the essential questions regarding Jewish genealogy: not just how have our origins shaped we are or who we might become? but, what is the Jewish meaning of Jewish genealogy and are we fulfilling any commandments in doing our studies?

She shaped her talk around dictionary definitions of genealogy:
Genealogy can bring us to self-actualization: why am I here? what is my unique role in the world? This is the Jewish nuance for the discipline of genealogy.

Joel Weintraub started his talk by proposing a title change: replace "know" with "consider." There are no hard and fast rules. I guess I would see it as there is no "presenter's jail" (although I have to admit I would like one for people who read their presentations!).

Joel's presentation noted some tips (such as use a remote slide changer to give yourself some flexibility to move about the room; don't put too much text on the screen; use at least 36 point letters; fade to black for section breaks).

When teaching beginners, Joel emphasizes involvement, documentation of family stories, debunking myths and expanding possibilities for research. The questions addressed include: where did they live? what were their names? how far back can we go? did anyone left in the Old Country survive the Holocaust? He presents his materials temporally from the Old Country, through immigration, through the Holocaust. The goal is to professionalize our presentations and personalize the study of family history so it has optimal appeal.

The are many ways to organize presentations for beginners. I have tried the essentially chronological tack, as Joel has presented. I have also tried going backwards in time as genealogists are told to do their research. Both strategies have their good points. Joel's builds on the concept of appealing to non-genealogists and hooking them. Perhaps that is a better method for inspiring, through personalizing strategies, the previously uninspired.

Recruitment and retention are, without a doubt, the biggest buggaboos for societies. The type of presentation Joel suggests, with the type of professional innovations he proposed, could make a difference.

The Opening Session started at 7:00 P.M. and featured several speakers.

From Marlis Humphrey, President of IAJGS; Janette Silverman, co-Chair of the conference; and Joel Spector, Program Chair, we learned that there are almost 1000 people registered from 17 countries. About one-third of this year's conference attendees are first-timers. There are over 300 lectures, workshops, labs and meetings scheduled.

Rabbi Gans who led us in an open prayer, noted that this is the 36th annual IAJGS conference - double chai! Definitely good luck and something to celebrate.

We also heard messages from Daniel Horowitz, Chief Genealogist, MyHeritage and Laryn Brown, Content Management, Ancestry. Both spoke of the sometimes inspirational stories that may come from those seeking their history and origins. Both companies can be proud of the work they have done to help people make the discoveries that uncover their stories.

Of note: lastyear at the IAJGS conference, Gilad Japhet promised that by the end of 2017, MyHeritage would photograph and index all tombstones in Israel. Danile reported that their goal is 48% complete.

Deputy Mayor of Seattle, Hyeok Kim, welcomed us and read a proclamation in honor of Jewish genealogy and the conference.


For a profile of Devin E. Naar, see my blog post for IAJGS on his background.

Naar introduced us to a Ladino expression that literally means "inlaw of my heel." It describes someone who may be a relative, but may be so far removed as to be questionable. I think, perhaps, this is close to the English expression "shirttail relative."

Naar explained his introduction into genealogy through research into two seemingly different Naar families in New Jersey. One was from the Caribbean and one from Salonica. Were they related? Were they inlaws of my heel?

His story of discovery led him across continents and through more than 400 years of historical context to understand the origins and outcomes of the two families travels, hard times and successes. One was part of the Sephardic western diaspora and the other part of the eastern. One was generations in the Caribbean, the other in Salonica.

While he has still not located the common ancestor, it is likely, from both archival records and Y-DNA testing that they share a common ancestor in Spain or Portugal.

Naar holds that Sephardic family history is not separate from general Jewish genealogy (which is heavily Ashkenazi-based). Gaps between the two branches are rapidly closing. Understanding of Sephardic experience enriches our understanding of Jewish people as a whole.

Studying Jewish family history allows us to grapple with our families' past and better understand our place our history and our world.